October 4, 2022/Beth Leipholtz
Table of Contents
Add a header to begin generating the table of contents

Nothing readies you to sit in a dark room for two hours while your baby is hooked up to machines and monitored.  It’s not so much the process itself.  It’s the waiting, the wondering, the trying not to read the expressions of the audiologist, to gain some insight into what is happening.

For us, the test took about two hours.  Two hours of staring at my sleepy newborn baby, wondering if he was able to hear something, anything, holding onto that little bit of hope.  As hearing parents, I think it’s natural to do that, to hold onto hope that your baby can hear the sounds of the world, that they are “normal” like you.  With time, that perspective shifts, but at first it’s something you cling to.

“We are seeing significant hearing loss… We had no response,” she replied in a soft voice, knowing the weight those words carried.

And yet, as I stared down at his perfect face, he looked so completely at peace.

It was then I realized this was going to be something I had to come to terms with, not him.  It was me, as his mom, that had to learn to see the beauty where we’d landed–the beauty in Holland.

In retrospect, I think what shocked me the most after our diagnosis was the fact that we were given about 20 minutes to absorb the information, then expected to stand up, pack up our baby, walk out, and be productive humans. Our worlds had been rocked, and yet we had to put one foot in front of the other and leave that office.  How we managed it, I still don’t know.

The moment we reached the safety of our car, I collapsed in the passenger seat, holding Cooper as near as I could, sobbing into him.  For me, anger and grief and sadness all come in the form of tears.  My husband sat in the driver’s seat, staring into space, processing the news in his own way.  It wasn’t until I handed him our sweet baby that he let his tears flow.

Somehow we managed to make the drive to my parents’ house, which was much closer than our own. As I sobbed on the couch, leaning into my parents, I couldn’t help but think about 9 months earlier when I’d done the same. It was the day I’d unexpectedly found out I was pregnant, and I was so scared and unprepared to be having a child.

Now, 9 months later, the contrast wasn’t lost on me. This time I was terrified because I loved this little boy beyond words. I wanted the world for him–a world that didn’t include being deaf.

I would like to say that processing the diagnosis became easier from that point on, but I would be lying. What many people don’t realize–what you can’t realize until being thrust into it–is that you can love your baby beyond words, but still grieve the baby you thought you would have.

You can love your baby so much, and still be angry, be scared, be sad, be drowning in the unfairness of it all.

Those first few weeks are such a blur, but somewhere along the way I came across this quote, and I clung to it like a lifeline. “Parenthood is about raising and celebrating the child you have, not the child you thought you’d have. It’s about understanding your child is exactly the person they are supposed to be. And, if you’re lucky, they might be the teacher who turns you into the person you’re supposed to be.”

My feelings were valid.  I was allowed to be grieving the child I thought we were having.  More than that, I needed to grieve that child in order to make room for Cooper.  I needed to make room to be all in, to become who I was going to become through this process.

Despite grieving Cooper’s diagnosis, I also found myself doing something odd: I was downplaying it. In my head, sometimes even out loud, I would find myself saying, “It could be worse. It could be his heart. It could be cancer.”

It’s true.  It could be worse. Chances are, it could always be worse.

But guess what? It doesn’t matter.  In the midst of it all, this, right here, is your worst.  Comparing that to someone else’s worst will only do harm. Just because a hearing loss isn’t a life-or-death situation doesn’t mean your emotions surrounding it are not valid.  Cry, wallow, scream, grieve. Do what you need to do in order to prepare yourself to rise to the occasion.

Then do it. Rise up.

Day by day, I felt myself feeling less and less as if I were floating through an alternate reality.  It became more real, more clear, more okay. It became our life. It became our normal.

Five months later, as I sat in that same chair with my feisty 6-month-old baby boy, I had a full circle moment of sorts. I realized we were okay.  In fact, we were more than okay.

As you move through making sense of your child’s diagnosis, remind yourself that it’s not a cut and dried process.  You will never be “done” grieving. As someone who appreciates order, I would so love to be able to check “Grieve” off my to-do list, but the thing about a process as complex as grief is that it can always claw its way back to the surface.

I think it was then that I truly understood how grief works–that it isn’t a linear process, that just because you have a good day doesn’t mean it can’t all come crashing down on you at any moment.

In those early weeks, I harbored so many emotions.  I would see children out and about, talking a mile a minute, responding to their parents’ words, and it would hit me like a ton of bricks that our journey would not be that status quo.  A song would come on the radio, the lyrics would tug at my heart, and I would sob while driving, sometimes even punching the steering wheel so I could feel something besides utter sadness.

During the weeks following Cooper’s diagnosis, we received many people simply asking what we needed and how we were feeling.  That was the type of support we needed at that time.  We needed to know that we had people to turn to when we were ready to do so, people who weren’t expecting us to do anything but exist at that time.

Our families (and friends we consider family) were our lifelines, dropping everything to accompany us to appointments, of which there were many.  They put their daily lives on pause in order to be there for us, something that I will forever appreciate.  Though technically I could have navigated some of the appointments on my own, it brought me so much comfort and a sense of calm to have someone by my side.  And more than that, they were able to be a voice of reason and logic while my emotions were still at the forefront.

It’s been said before, but so much of the journey to accepting a diagnosis is truly letting yourself feel the emotions.  Don’t think about how you should feel, or how you want to feel, or how you may feel tomorrow.  Just feel. Let the tears come. Let the anger come. Let whatever comes, come.

More than that, give yourself grace through the process. Realize it isn’t black and white. Sometimes emotion hits you out of nowhere, even well into your journey.

So if you’re that new mama, all I can offer is this: Know you’re not alone. Far from it. There’s a whole community out here ready to welcome you and your sweet baby, and I hope you find us when you’re ready.

Holding Both Grief and Acceptance

Even now, a year later, I still have pangs of grief.  I wouldn’t trade our journey for the world, but to see babies around Cooper’s age beginning to mimic sound and even say words…it’s like a gut punch at times.

I realize now that it’s not one or the other.  Grief and acceptance can coexist. Today, the word deaf rolls off my tongue easily. “He’s deaf,” I tell strangers in stores, at the playground, at the pool when I notice them peering at Coop’s hearing technology. 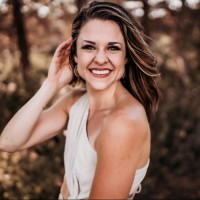 As the hearing mother of a deaf child, Beth Leipholtz has a passion for inclusion. Her books aim to create a more accepting and accessible world for our children. In addition to spending time with her family, Beth enjoys Minnesota summers, photography, iced Americanos, CrossFit, and a good old-fashioned book.
Back To All Posts
Scroll to Top